The Defence Reserves Association (DRA), which represents the interests of all Australian Defence Force (ADF) Reservists, together with other Veterans’ organisations including the Defence Force Welfare Association, has for many years advocated for a Veterans’ Covenant to recognise the unique nature of military service. In October 2019 legislation passed Federal Parliament, Australian Veterans’ Recognition (Putting Veterans and Their Families First) Act 2019 (the Act), introducing the Australian Defence Veterans’ Covenant.

During their advocacy, the DRA and other Veterans’ organisations, did not seek any wider recognition of veterans beyond the development and issue of a Veterans’ Covenant.

Nonetheless, the Australian Government, through the Department of Veterans’ Affairs (DVA), decided to issue a wider recognition package including a Lapel Pin, Oath and supporting Veteran Card to any member or former member of the ADF who had completed one day’s continuous full-time service. A different Lapel Pin, but no Veteran Card is provided to ADF Reservists who have had no period of full-time service, with some limited exceptions.

The decision to introduce a Lapel Pin and Veteran Card, including a different Lapel Pin and no Veteran Card to ADF Reservists who had no period of full-time service was taken without the considered consultation such a decision warrants. At no time was the DRA consulted or asked for its opinion on this matter.

The Act defines ‘veteran’ as a person who has served, or is serving, as a member of the Permanent Forces or as a member of the Reserves. It also includes detail of the associated Veterans’ Recognition Package (VRP). However, in administering the VRP, for some inexplicable reason, DVA found it convenient to ignore the definition of Veteran provided in the Act, and instead separated its eligible client base into one of two categories: Veteran or Reservist. There are eight categories of eligibility listed for VRP-associated items including the Veteran Card. The Veteran Card itself is available to some Reservists, including those with at least one day Continuous Full Time Service, while many others are excluded.

Those Reservists ineligible for a Veteran Card, including many long-serving Reservists, are denied the opportunity to access mental health care and treatment under the DVA administered non-liability health care provisions, as well as the business benefits associated with the Veteran Card, promoted by DVA and the Minister.

It is difficult to imagine how, or why, a more discriminatory and unfair scheme of Service recognition could have been devised. The DRA argues that issuing a different Lapel Pin and denying many Reservists a Veteran Card, is both divisive and contrary to the aims of a totally integrated ADF.

For at least the past five years, the Service Chiefs have actively pursued the promotion of a 'Total Force' concept, appreciating the significant additional capability provided by their respective Reserve components in support of ADF operations. The Service Chiefs promote the structure of their Service as having full time and part time components and openly acknowledge that without the contribution of the part time component, they would not be capable of delivering the outcomes demanded by Government. The part time component has become critical to ensuring the delivery of ADF operational capability.

The application of the DVA eligibility categories has undermined the position of the Service Chiefs and have left many Reservists questioning where they stand. Reservists do not want a separate 'Reserve' Lapel Pin; they do not wish to be differentiated or highlighted as 'something different' within the Total Force, where they proudly serve and contribute in a significant way to ADF capability.

The nature of part-time service provides the Service Chief with the option of employing a Reservist on either a full-time service contract or by using Reserve Service Days (RSDs). On many occasions in the past, particularly where the task required a relatively short period of engagement, Reservists were employed utilising RSD rather than being placed on full-time service. Typical of such tasks were short term domestic security operations, border protection operations and provision of aid to the civil community.

For many years the soldiers of the Regional Force Surveillance Units have regularly conducted operational patrols across northern Australia, serving not on full-time service but rather on RSD. In other circumstances, Reservists were widely employed in ADF units utilising RSD, to cover the release of full-time personnel to undertake operational service. They undertook the same tasks and delivered the same output as the full-time personnel they replaced.

In establishing the eligibility for Reservists to apply for all components of the VRP, DVA has subsequently acknowledged that those who ‘have engaged in Disaster Relief Service, Border Protection Service, or involved in a serious service-related training accident’ are eligible. This concession of sorts does not adequately cover the wide gambit of service undertaken and provided by Reservists who have served, and continue to serve, in the ADF. This is an unacceptable situation.

Many ADF Reservists have extensive periods of service, other than full-time service, and are disappointed that their service appears to be undervalued by the Australian Government.

The Defence Reserves Association argues that DVA must apply the term Veteran, as defined in the Act, to the administration of the VRP. All Veterans, including Reservists, would then be entitled to receive the same Covenant items, including the Veteran White Card and a common Lapel Pin. Access to the Veteran White Card would provide all serving and former Reservists with access to mental health care and treatment under the DVA administered non-liability health care provisions; a provision currently denied to many serving and former Reservists. 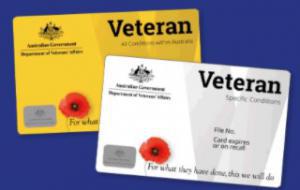